Bankruptcy Filings on the Decline

According to the Administrative Office of the United States Courts, bankruptcy filings were down .9% from March 2018 to March 2019.

There were nearly 1.6 million bankruptcy filings in 2010, when data revealed an increase in filings from 2008-2011.  The statistics indicate a national declining trend since 2011.

Compared to previous years, corporate and consumer bankruptcy filings are at the lowest in approximately a decade.

Possibly, people may not be filing bankruptcy protection because of the cost to do so, or they may not have many assets to protect.

A Chapter 7 bankruptcy, for example, includes attorney fees, court costs, and fees that debtors incur. In Chapter 13 cases, a repayment plan is devised which includes fees that are payed over time as part of the resolution of the bankruptcy case. 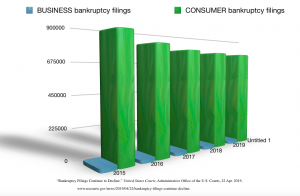 Another item realized in the data was that older Americans are filing bankruptcy at higher rates. This could be due to high medical costs and low income. As more people enter the workforce and take on more credit, there is a possibility of more consumer bankruptcy.

Reports indicate a steady rise in filings from 2007-2010, but they have fallen steadily in the last eight years. This decline coincides with a nine-year bull run streak on Wall Street.

According to experts and Federal Reserve data, bankruptcy trends seem to follow Americans’ debt-to-income ratio. Even with record credit card debt, Americans are in a better position to pay debt than they were during a recession.

Americans owe 1.5 trillion dollars in student loan debt. This type of debt cannot be eliminated in a bankruptcy unless “undue hardship” can be proven. Filing bankruptcy will not help with student loan debt, but the efforts to repay them can be overwhelming and cause financial hardship. Consumers ages 18-34 typically filed less bankruptcies the last decade compared to ages 65+.